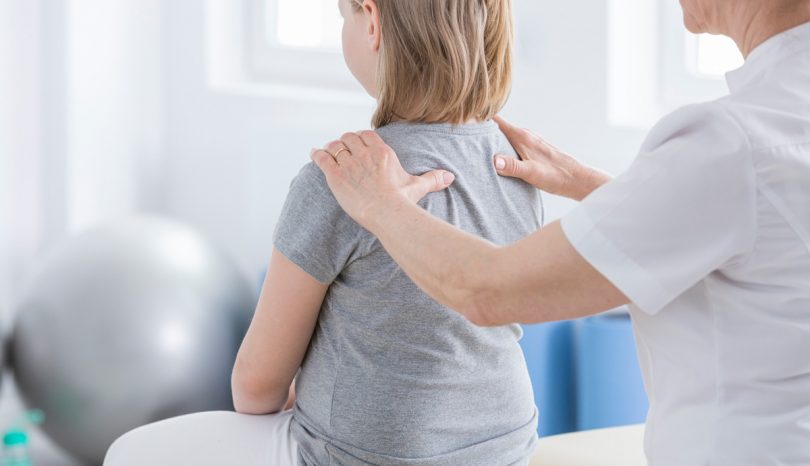 Scoliosis is an abnormal curvature of the spine. Approximately 7 million people in the U.S. are affected by it. The primary age of onset is 10-15, and both boys and girls are affected. However, girls are more likely to have the curve of their spine progress to a magnitude that requires treatment. Adult scoliosis is a condition that possibly was not diagnosed or treated in childhood. Scoliosis is suspected when one shoulder is higher than the other or the pelvis appears to be tilted. Scoliosis has no cure but can be prevented if detected early.

In approximately 85 percent of cases, the cause of scoliosis is idiopathic, or unknown. Scoliosis appears to run in families, so a genetic component is suspected.

In some cases, diseases of the neuromuscular system cause scoliosis. Cerebral palsy and muscular dystrophy, for example, cause poor muscle control and weakness or paralysis that can lead to scoliosis. Congenital scoliosis is a birth defect that affects the formation of vertebrae or causes fused ribs during prenatal development. Brain stem abnormalities play a role in some cases of scoliosis.

If the curve of the spine in a person with scoliosis becomes worse, it can rotate and twist as well as curve to the side. Ribs sometimes stick out on one side of the body, and breathing problems develop.

To determine whether someone has scoliosis, a health care provider performs a physical exam, which includes a forward-bending test to define the curve of the spine. If a curve is identified, an X-ray determines its severity. A neurologic exam determines if any changes in strength, sensation or reflexes have occurred.

The majority of children with scoliosis have a curvature of the spine that is less than 20 degrees, which is considered mild, and require no treatment. Regular X-rays detect whether any changes have developed.

If the spine curves 25-40 degrees in a child who is still growing, experts typically recommend that the child wear a brace to help slow the progression of the curve. The braces use pressure to straighten the spine and are adjusted as the child grows. A brace does not cure scoliosis or reverse the existing curve, but it can prevent the curve from progressing further. Braces are helpful with idiopathic scoliosis but not congenital or neuromuscular scoliosis.

When the spine has a curve that is greater than 40 degrees, surgery typically is recommended because scoliosis this extreme tends to get worse after a child stops growing. Although the curve cannot be corrected completely, surgery aims to correct it as much as possible by fusing the bones in the curve together. The bones are held in place with metal rods until the bones heal together. After surgery, a brace can help stabilize the spine.